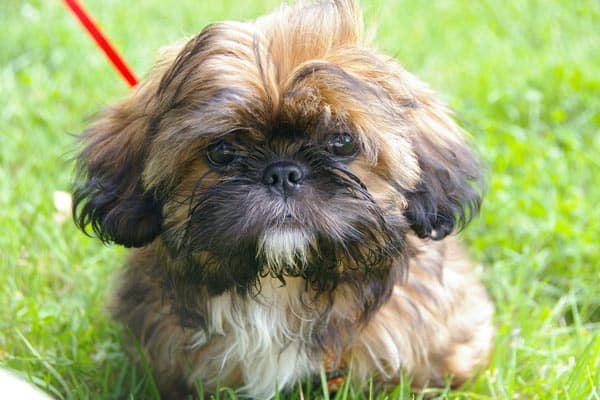 7 Dogs that Look Like Shih Tzu: Mirror Images, Copycats, and Near Misses

“Oh geez, all those little dogs look the same.” That is what those of us who do not own Shih Tzus or see them every day think. Of course, not all small breeds look identical.

However, several breeds look a lot like Shi Tzus, especially when you consider the recent trend to add more colors. Do not despair, though, because there are some surefire tips to differentiate confusing breeds.

Perhaps among the most famous dogs that look like Shih Tzu are Lhasa Apsos. Other near look-alikes are the Havanese, Russian Svetnaya Balonka, Shichon, and Maltipoo.

Several dogs are similar in stature and temperament to the Shih Tzu but do not look much like it. Still, another group of dogs looks similar to Shih Tzus, but you can easily tell them apart.

However, by looking at size, coat texture and color possibilities, and physical features, you will soon be able to pick out a Shih Tzu from a class of any small or Toy breed.

What makes a Shih Tzu?

The history, breed standard, coat, and colors are what make the Shih Tzu stand apart from others and contribute to its similarities with certain dogs.

Although China often receives credit for developing the Shih Tzu, its ancestors originated in Tibet.

Part of the Shih Tzu’s ancestry likely involved none other than the Lhasa Apso. China then crossed these squat little dogs with the Pekingese and perhaps Pug, possibly to dwarf their features and make them more appealing to the Royalty who coveted them as pampered pets.

Shih Tzus came into their own palace watchdogs by the 1630s. However, they blossomed under the rule of the Dowager Empress Tzu Hsi who cherished the breed. The Shih Tzu flourished from the 1860s to about 1908.

As with many breeds, the Shih Tzu almost died out, in this case from the death of the empress and not wartimes. Revival of the breed was based on seven prime individuals of each gender, and an official breed standard came out in 1938.

We will discuss how other breeds deviate from Shih Tzu’s breed standard to aid you in making tough distinctions.

The Shih Tzu is a small dog in the Toy category. Both sexes are similar in size, ranging from eight to eleven inches tall and weighing nine to sixteen pounds. However, the AKC prefers narrower height restrictions between nine and ten and a half inches.

No longer square-shaped like their ancient forefathers, a Shih Tzu should be compact and slightly longer than tall.

All official heights measure a dog at the shoulders. This is relevant because you will run across breeds where the hips are higher than the shoulders.

Males can have more substance and be a little heavier than females. You will not see sexual dimorphism (gender differences) to nearly the extent you would in many other breeds.

A Shih Tzu’s head is broad and the face round. The breed has wide-spaced large eyes that should always appear to be set forward and looking straight at you.

Dogs with dilute coat colors have light-colored eyes. Otherwise, Shih Tzus have round, dark, and expressive eyes and low-set hanging ears. Their ears are large relative to their head.

A Shih Tzu is marked by a dome-shaped forehead, a definite stop, and an undershot jaw. The muzzle is short and square.

Everything about the Shih Tzu should look balanced, smooth, and flowing. The breed is comprised of curves rather than angles, with the neck flowing into the shoulders and chest. The chest should not be too wide or deep and the topline is level as it meets the croup and hips.

Shih Tzus are surprisingly sturdy for their size. Assessing the body condition accurately in this breed is essential as they are prone to become overweight yet do not have an obvious waist or an abdominal tuck-up from the chest to the pelvis.

Specifications for the tail are rigid, with a generous plume over the back most desirable. A tail that is too loose or tight will detract from its maximum beauty, and show judges penalize it.

The Shih Tzu is a companion pet but moves like a working dog. Her gait should be free and smooth with plenty of drive from the hindquarters. The biggest difference is that a Shih Tzu can move with all the leisure she wants, not to be hurried or rushed along in the show ring.

The Shih Tzu’s coat is its crowning glory. In its natural and well-kept state, it is long, flowing, and luxurious. This breed is one of the few dogs with a dual coat that still is considered hypoallergenic.

A majority of owners keep their dogs in body clips for easier maintenance as the coat can easily reach the ground. Teddy bear shaves and puppy clips are popular and show off the dog’s facial features to great advantage.

Show dog owners are only allowed to trim their dogs’ feet and perform a limited sanitary clip (trim hair around the anus). They brush their dogs daily as must owners who keep their Shih Tzus in a full coat.

Shih Tzus can be almost any color or pattern. Solid colors are less common than dual colors. Tricolors are exceedingly rare.

Solid colors include black, red, silver, gold, and white. Dilute, black-based colors are blue, chocolate, or liver, and Isabella or lavender. Bicolor dogs are often white mixed with one of the solid colors, frequently white and gold or silver. Tricolor dogs are usually gold and black with white markings.

You can also find brindle dogs that have a light base color with dark striping. The long hair of the Shih Tzu makes the brindle pattern appear marbled.

A Shih Tzu’s desirable temperament is as well-defined as its physical form. Many times, various nuances in a dog’s disposition can differentiate it from other breeds.

Shih Tzus have always been primarily companion animals and should behave accordingly. They are friendly and trusting. Shih Tzus do not guard but are great alarmists, barking at any intrusion or anything that does not seem right.

Your Shih Tzu should also be affectionate, outgoing, fearless, loyal, playful, and jaunty. Anyone’s first impression of a Shih Tzu will be of a smart, infectious, happy, go-lucky dog. Although intelligent, Shih Tzus are not as cooperative about training as other dogs.

There are a few dogs that look so much like Shih Tzus that it may cause you to take a second look.

It can be very difficult to tell Lhasa Apsos and Shih Tzus apart. The Lhasa Apso also originated in Tibet thousands of years ago, and many historians feel it was an important ancestor of the Shih Tzu. An outline of the most important differences follows:

It is difficult to judge differences in the haircoat if two dogs are shaved, but you can see the other significant variations between the Lhasa and the Shih Tzu. Russian Balonka ancestors hailed from France. Moscow and Petersburg cultivated companion dogs from these gift pets brought over by Louis XIV around the 18th century.

They belong to the Bichon family and experienced crossing with Russian local dogs and the Pekingese, Bolognese, and Bichon Frise in their development.

They look somewhat like both a Shih Tzu and a Lhasa Apso. With many dog breeds, people seemed to have come up with similar ideas in different areas of the world.

The Havanese looks like the Shih Tzu but originated in Cuba. It is a member of the Bichon family with the Maltese, Bichon Frise, and others. A Maltipoo, or a cross between a Maltese and a Poodle, can often look much like a Shih Tzu. There are important consistent differences.

A couple of breeds kind of look like a Shih Tzu Like the other Chinese Toy breeds, the Pekingese is an ancient dog from at least 2,000 years ago, and only Chinese royals were permitted to have them. They were watchdogs and companions of the Imperial courts.

In a truce gone wrong, English invaders took at least five dogs when they invaded and looted the Imperial Palace and gardens of Peking and presented them to Queen Victoria in 1860.

Because of their hair, body shape, and facial structure, they look similar but not quite like the Shih Tzu. Although its history is not known with complete certainty, many experts believe the Maltese originated in Malta off Italy. At the very least, it appears that much of its development took place on those islands. Scientists also commonly believe the Maltese is the oldest of the Bichons.

Maltese were often seen aboard trading ships where they may have kept rats under control. The Maltese ultimately became a companion dog. It can look like a small white Shih Tzu.

Is a designer dog that is part Shih Tzu cheating?

Several hybrid dogs have a Shih Tzu as one of their parents. The Shih Tzu has become a popular addition to many designer dogs; these mixed breeds look similar to the Shih Tzu by default. However, you can usually tell right off the bat that such dogs are crossbred.

Usually, the face is different as well as the coat. Many Shih Tzu mixes take on a Teddy Bear appearance with a shortened muzzle, tousled wisps of hair around the face, button-like ears, round heads, and round dark eyes.

When you research Shih Tzus, you will see breeds that people list as an alternative or as similar. Many of these dogs are similar in size and temperament but not much else.

This video shows the wide range of colors for Shih Tzus and goes over their unique traits. Note the round heads, large eyes, and slightly rectangular bodies.

Many of the players in the videos are puppies. Their abundant coats do not fully come in until they are almost a year old. You will also see that many of the adult dogs are clipped.

Note the Lhasa Apso’s distinct mustache and beard. You will also notice how the hair is slightly less uniform in length and you can see feathering more distinctly than on a Shih Tzu.

This video is comprised of still images, but it is to better illustrate the differences in Lhasa’s coat.

A dog in a full coat makes it more difficult to see, but you can detect the subtle feathering on the legs and ears of a couple of the dogs.

Notice the more almond-shaped eyes and the set of the ears that gives the Apso a completely distinct expression from the Shih Tzu.

Finally, the tail does not look as generous as the Shih Tzu because, again, it illustrates feathering on the underside rather than a full plume.

You can see the long face, how the ears are different in their set and size, and the spring in the step of the Havanese compared to the Shih Tzu.

Here is a dog that advertisers often lump with Shih Tzus but do not really look like them. Similarities end at the size and the way the hair tends to grow upward from the snout.

The Coton has a much longer muzzle, a different shape to her ears, eyes, and face, and a single layer coat.

Finally, you have the Pekingese which is a likely ancestor of the Shih Tzu. Even in these puppies, you can compare them to the Shih Tzu pups and see that the Peke’s coats will stand out further from the body while the Shih Tzu’s lies flat.

The head and face on the Pekingese are rounders, resembling a monkey. The muzzle, however, is similar in both breeds, although the Pekingese has a flatter face. Do Shih Tzu Shed – Are They Low Maintenance 18 Surprising Things Shih Tzu Hates to Experience: How to Overcome Them!