How Long Do Great Pyrenees Live? Keeping Your Dog Majestic

Whether you get a puppy, juvenile, or a full-grown dog, you naturally are curious about how long you can expect her to live.

Although most people do not let a shortened lifespan deter them from their favorite breeds, it is helpful to learn what pitfalls might shorten your dog’s life. You also are bound to research all the ways you can keep your pet around as long as possible.

The Great Pyrenees live an average of 10 to 12 years. A few may not survive that long. However, several live to the age of 13 or 14 years which is quite a feat for such a large dog.

The great Pyrenees most commonly die from osteosarcoma, complications of degenerative myelopathy, end-stage hip dysplasia, or heart disease. However, young dogs can succumb to trauma from being struck by a vehicle or other accidents.

How do you compare the life expectancy of small versus large dogs?

Small-breed dogs typically live longer than their larger counterparts. A general rule of thumb for the size classes is as follows.

Many small breeds live even longer than 15 years

There are, of course, exceptions. French Bulldogs are small or medium dogs that have a life expectancy of 10 to 14 years because of their breathing challenges.

Australian Shepherds and Border Collies are medium-sized dogs with life expectancies of 12 to 15 years and 10 to 17 years, respectively. The Great Pyrenees can be a giant breed and yet has a life expectancy of 10 to 12 years.

How does the Great Pyrenees life expectancy compare to its peers?

The Great Pyrenees lives much longer than other giant breeds and even some of its close relatives.

While the ranges of giant breeds are quite optimistic, the longest-lived representatives like the Rottie and Dane only have an average life expectancy of 9.5 and 9 years, respectively.

For the Irish Wolfhound and Bernese Mountain Dog, an average life lasts a dismal seven years. Of this group, Newfoundland, St Bernard, and Newfoundland are the most closely related to the Great Pyrenees.

It is more appropriate in many ways to compare the Great Pyrenees to other livestock guardian dogs.

As a reminder, the Great Pyrenees is about 26 to 32 inches tall at the shoulders and weighs 80 to 125 pounds or more.

The other livestock guardian dogs, except the Pyrenean Mastiff, are varying degrees smaller with the Kuvasz being the closest. Pyrenean Mastiffs can be close to 200 pounds.

Why do the Great Pyrenees live so long?

Your first thought is probably, “Twelve years is not that long for a dog to live. “ However, it is quite impressive considering the Great Pyr’s size and with the knowledge that it is not unheard of for them to live thirteen years or more.

The first question to address is why large dogs have such a short lifespan compared to small breeds. One theory that makes the most sense is that rapid growth increases the likelihood of cells undergoing oxidative stress. Oxidation is a normal process your dog’s body goes through during metabolism.

It speeds up during growth as well as in response to environmental factors such as bustling city life, lack of exercise, and mental stress.

Increased oxidation produces more free radicals which can damage cells, DNA, and proteins, accelerate aging, and increase an individual’s susceptibility to debilitating diseases. Diet has a crucial role in preventing or contributing to oxidative stress.

If you think about growth in puppies, you can easily see how giant and large breeds increase their size at a much greater rate than small dogs.

According to Smartfloss.com, a Mastiff or similar breed would increase its size 100-fold compared to about 20-fold or less for a Yorkshire Terrier over the course of its first year of life.

Not only do large-breed dogs grow at a faster rate and over a longer period than the small ones, but humans have selected for an accelerated size increase. Scientists postulate that accelerated growth causes extensive free radicalization.

However, Great Pyrenees do not seem to suffer to the extent other breeds their size do. They have a few advantages.

According to OFA statistics, the Great Pyr still does not suffer from such genetic problems as hip dysplasia.

Although hip dysplasia seems like a problematic but nonthreatening orthopedic problem, such logic does not account for the number of dogs euthanized because of long-term suffering from arthritis.

Small dogs do not show hip dysplasia to the degree large animals do because they are lighter and able to distribute weight load more effectively.

The Great Pyrenees suffers from hip dysplasia at an estimated rate of less than 10% compared to St Bernard at close to 50%.

Even the Kuvasz suffered hip dysplasia at the rate of 18.5%, perhaps reflecting a smaller gene pool. Great Pyrs also show a low incidence of degenerative myelopathy (5.9%0 and heart disease(3.3%).

First and Foremost a Working Dog

As the Great Pyrenees becomes more of a companion dog, we may see health issues increase and life expectancy go down.

However, there is still significant motivation to select for working qualities as Great Pyrenees are still popular LFGs as of 2020. They must be sound of body and mind to withstand the vigor of working on a farm. In dogs where the emphasis on work supersedes appearance, often their vigor and longevity are more notable.

However, fanciers do not encourage accelerated growth and you will see an 80-fold growth in the first year as opposed to 100times. That decrease appears to be just enough to expand the lifespan.

What shortens the Great Pyrenees’ life?

The majority of Great Pyrenees live at least nine or ten years. However, puppies are prone to traumatic accidents.

Great Pyrenees have only a few serious health issues.

TThe Great Pyrenees suffers from several health problems, but at the moment you are eager to learn about the ones that have a direct effect on the length of her life.

Bone cancer, or osteosarcoma, appears more often in large and giant breeds than other dogs. Moreover, it can be devastating because it shows up during middle-age for many dogs.

For A greyhound that might be ten years old, but for a Great Pyrenees, it could be six or seven years of age. Osteosarcoma typically affects the upper humerus just below the shoulder or the lower femur above the knee.

It can also appear on the ribs, pelvis, or vertebrae. Often, by the time you detect a problem, it has already spread to the lungs, making early diagnosis crucial to prolonging life. Bone cancer is so aggressive and painful that quality of life concerns are paramount. Amputation of the affected limb and chemotherapy still offers the best survival rate of just under a year.

This assumes there is no evidence of metastasis at the time of surgery. A limb-sparing procedure is performed on some dogs with similar success. The surgeon removes the tumorous bone and replaces it with a titanium plate.

The best candidates are those dogs with no radiographic evidence of secondary disease, and it is a procedure only appropriate for the foreleg, according to specialists at Animal Hospital of Clemmons.

For dogs in which amputation is not a viable option, chemotherapy and radiation combined can relieve pain and improve quality of life for up to six months. Owners who choose not to treat find they cannot manage their pets’ pain past about 60 days.

Most dogs with osteosarcoma are euthanized because the disease has spread to the lungs or other bones and because of unmanageable pain.

Luckily, the Great Pyrenees is not a breed that commonly experiences dilatative cardiomyopathy.

However, it can strike as early as six or seven years, and affected dogs typically only live one to three years even with treatment.

Since the disease tends to produce arrhythmias, some dogs will die suddenly without warning or any clinical signs. The disease process involves a weakening of the left side of the heart.

Inefficient contractions and erratic beating allow the chambers of the heart to overfill with blood, causing it to dilate over time.

Meanwhile, the walls of the heart become thinner and more ineffectual. Most dogs will suffer congestive heart failure.

The Great Pyrenees is a huge dog, and mobility issues usually make her unmanageable for her owners.

You will become rightfully concerned about your dog’s quality of life if she cannot get up. Her weight and impressive coat make lifting her difficult at best and leave her vulnerable to bedsores and fly strikes with subsequent maggots.

Probably due to motility issues, older dogs are more likely to suffer from bloat or GDV. Gastric dilatation and volvulus refer to the stomach swelling with gas or fluid and flipping 45 to over 180 degrees around its axis.

It sometimes drags the spleen with it and can start to necrose as circulation is blocked. GDV causes serious life-threatening changes. 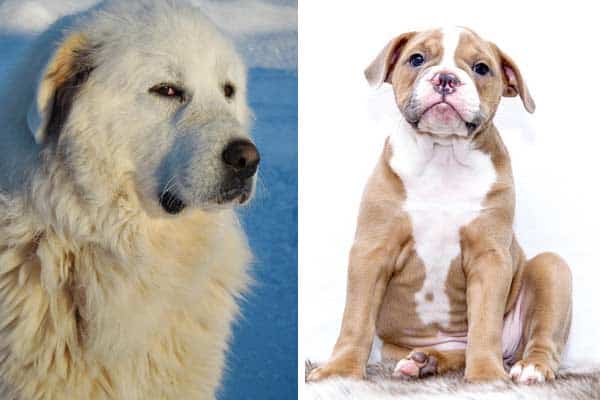