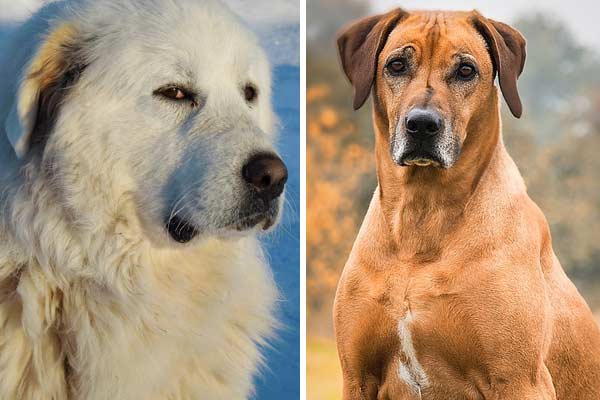 Dogs descended from the Rhodesian ridgeback and the Great Pyrenees are the epitome of majesty, attracting admirers everywhere they go thanks to their stunning appearance and formidable strength.

Rhodesian Ridgeback Great Pyrenees mixes are well-known not just for their excellent temperament but also for their remarkable beauty.

These dogs are a hybrid breed created by crossing Great Pyrenees with Rhodesian ridgebacks.

The Great Pyrenees has a reputation for bravery, patience, and self-assurance. Both of these canines have the potential to be sociable, but individual temperaments vary widely.

However, there is a direct correlation between how well socialized a dog is and how well it gets along with other people and animals.

How does this hybrid dog behave? What kind of dog is it most similar to, the Great Pyrenees or the Rhodesian ridgeback? Below, we shall attempt to address these concerns.

Read on to find out everything there is to know about the stunning Great Pyrenees Rhodesian Ridgeback Mix.

The combination of these popular breeds- known for friendliness and tolerance with children – is well-loved.

Shedding is a significant drawback of dog ownership. Hence, you’re advised to consider which breed is best for you.

And let’s be clear: the Rhodesian Ridgeback Great Pyrenees dog breeds are heavy shedders. Although it can be minimized by frequent brushing, it can never be stopped. So, if it’s a deal breaker for you, consider getting another breed.

All dogs indeed need obedience instruction, but some are more amenable to training than others.

New owners might find these dogs challenging to teach because of their obstinate nature.

However, this doesn’t imply that the Rhodesian Ridgeback Great Pyrenees’ dog breeds are untrainable. It only means that you’ll need patience and expertise to achieve it.

If you decide to adopt one of these canines, keep in mind that the three pillars of pooch training_ patience, perseverance, and consistency_ are crucial to the success of your training efforts.

If you believe you cannot train the puppy, contemplate requesting expert assistance.

Not Very Adaptable for Apartment Living

People usually picture dogs that can adjust to apartment life when they hear the term “dog adaptability,” so let’s shed some light on that.

Although canines, in general, are fantastic, not every breed is well-suited to urban apartment life. Depending on factors like size, activity level, noise level, scent, and shedding, one dog breed could be worse than another for apartment living.

Regrettably, the Rhodesian Ridgeback Great Pyrenees mix does not have a stellar reputation as a dog that works well in small spaces like apartments.

Most Rhodesian Ridgeback Great Pyrenees will treat their own family’s pets as they would human children.

However, they are hard-wired to avoid contact with creatures that aren’t a part of their pack. Frequently, Rhodesian ridgeback Great Pyrenees show aggression or dominance with canine strangers.

Tendency to Bark, Howl, and Snore

Nonetheless, they never open up to outsiders and always maintain a healthy dose of mistrust. Such steadfastness and unwavering dedication, however admirable, are not without drawbacks.

Although the canine will not have second thoughts about risking its life to save yours, it is heavily inclined to bark loudly towards anything they presume is a threat.

In simpler terms, if you fail to train your puppy to be selective with its barks, you should anticipate many protests from the people residing nearby. Though they may constantly bark throughout the day, healthy Rhodesian Ridgeback Great Pyrenees seldom snore at night.

You Lack a Fence

Most Rhodesian Ridgeback Great Pyrenees rescues need a 6-foot-tall fence, and there’s a good reason for that.

These dogs are superb climbers and escape artists, so a high, secure fence is essential. Their ability to climb is quite impressive.

You can go out of your way and install an unseen barrier, but you will not achieve anything meaningful. Regarding discomfort, Rhodesian Ridgeback Great Pyrenees dog breeds have an extremely high tolerance.

If you don’t have a way to keep your dog inside, as with a fence, a GPS collar is essential.

You wish for an Unrestrained Pooch.

A Rhodesian Ridgeback Great Pyrenees mix is not ideal when looking for an unrestrained dog that can keep up with you on long beach strolls or forest excursions.

Reasons Why You Should Get a Rhodesian Ridgeback Great Pyrenees Mix

The dog’s heat tolerance has to be taken into account while making your selection.

Even though Rhodesian Ridgeback Great Pyrenees mixes can handle the heat well, it’s best to exercise caution whenever the mercury’s thermometer rises.

It’s best to go out early in the morning or late at night, when it’s more relaxed, and bring drinks and a shade if the weather is scorching. Avoid pavements as well; if your hand can’t stand the heat for several seconds, your dog’s paws won’t be able to handle it.

Most dogs can tolerate cold temperatures up to about 45 degrees Fahrenheit, but once the mercury drops any lower, some of the more sensitive breeds may start to suffer.

Chow handlers should pay special attention to their fluffy friends when the temperature drops below 32 degrees Fahrenheit, especially those with small breeds with thin coats or very young, old, or sick dogs.

When the thermometer drops below 20 degrees Fahrenheit, dog owners should know that their pets are at risk for cold-related illnesses like hypothermia.

The good news is that the Rhodesian Ridgeback Great Pyrenees’ dog breeds are well-suited to cold climates. Following the guidelines above, your pets should be comfortable in freezing temperatures.

Indeed, some dogs drool excessively while others don’t. Rhodesian Ridgeback Great Pyrenees dogs, as you may well know, are primarily mountain dogs; thus, they appreciate the cold weather.

Nonetheless, the Rhodesian Ridgeback Great Pyrenees dogs may start to drool if they become too hot from the weather or do too much activity.

Luckily, maintaining a comfortable temperature and a stress-free setting may help dramatically reduce their drooling. And since there’re measures you can put in place to curtail the drooling, the canine is considered a low drooling breed.

Puppy mouthiness is a widespread problem that affects dogs of all breeds, including the Retriever family.

When a dog is mouthy, it tends to utilize its mouth quite frequently in typical situations. A mouthy dog is more prone to nip at and play-bite its owner. However, play bites are usually harmless and don’t cause serious injuries.

Luckily, the Rhodesian Ridgeback Great Pyrenees dogs are a brilliant option if you wish for a chow, which does not require mouthiness exercise.

And all pups go through a stage where they nip and chew, and this one is no different for your dog. Remember that more giant puppies can cause more damage to your home and belongings than smaller ones.

Therefore, you shouldn’t let them run amok around the home until they’ve matured and stopped being so mouthy.

In time, however, dogs will outgrow this phase and learn to redirect their chewing habit to safe objects like chew toys instead of humans or furniture.

However, it would help if you never let them become bored by providing them with plenty of instruction, socializing, and playtime.

The Rhodesian Ridgeback Great Pyrenees dog breeds have a bit of an aggressive personality. Be wary of any curious behavior on their part because they are only minor.

Nonetheless, they are like any other pup; they crave human interaction and dislike being left alone. So, prepare to put in some time and energy to socialize with her, as it will be worthwhile in the end.

Even though they sometimes act independently, you should always reward good behavior. Have fun with your new mutt, and cherish the bond you two will share.

However, adopting a Rhodesian Ridgeback Great Pyrenees hybrid is much cheaper than buying one from a breeder.

But you’ll part with roughly $300 since there are a lot of upfront costs associated with adopting a Rhodesian Ridgeback Great Pyrenees mix.

Even if you are familiar with the breed, it might be difficult to predict whether or not the animal would shed much.

You’d better save up for a decent vacuum if you care about maintaining clean floors. Bathe them as required, but don’t soak them so long that their skin cracks and dries up.

Since certain dog breeds are more predisposed to certain diseases than others, the canine population is at risk of developing hereditary health issues. The one advantage of owning a puppy is that you can minimize this problem.

Puppies should be offered some health assurance from their breeder. A trustworthy breeder will be forthright about the prevalence of known breed-specific health issues. If they are unwilling to provide this information, you should go to another breeder.

The best place to seek your new mutt is through a reputable animal rescue organization in your neighborhood. To verify that a dog is healthy, health clearances must show that it has been tested for and found to be free of a particular disease or illness.

There is concern that a Great Pyrenees x Rhodesian Ridgeback cross might be predisposed to various health issues, including dysplasia of the joints, heart disease, and cancer of the bones.

Please remember that these are only some more typical issues with both breeds.

Feeding is often tailored to each dog. Because of their individuality, they have various nutritional needs. In the United States, a majority of canine populations are overweight.

Early intervention with fish oil, glucosamine, and chondroitin supplements is essential in a breed like this, which predisposes to hip and elbow dysplasia.

To keep their energy levels low, you should plan to take them on long walks and climbs. This blend is likely to be quite stimulating. With regular physical activity, they will be less likely to act destructively.

This is a bright dog, but it will be challenging to teach. They will attempt to assume a leadership role; therefore, they’ll need a strong and steady hand from an authoritative figure to keep them in their proper place.

If you want to maintain their attention for longer, divide the sessions into small chunks throughout the day.

It may have a prey drive and be inclined to go after and chase tiny animals, but this may be controlled with appropriate training and supervision. Positive reinforcement is the most effective training method for canine companions.

Don’t forget to give her compliments on the occasions she deserves them. This intelligent, eager-to-please pup thrives when presented with a rigorous physical test.

A Rhodesian ridgeback Great Pyrenees mix is an excellent choice for a companion dog. They are pretty warm and friendly with their family and will quickly be accepted as one of the members.

Their extroverted nature and kind demeanor make them a perfect addition to any family.

The Rhodesian ridgeback Great Pyrenees is one breed that, if raised with other animals early on, is more likely to get along with them as adults. When correctly acquainted, it also gets along well with other dog breeds.

A Rhodesian ridgeback Great Pyrenees mix might make a wonderful pet if you have a relatively laid-back lifestyle and live in the suburbs.

Additionally, it is believed that hybrids have fewer health problems due to their parents’ genes than purebreds.

They value predictability and order in their lives and find great comfort in spending time alone at home. Their protective character also highlights the need to socialize.

Assuming you meet these requirements, you can acquire a Rhodesian ridgeback Great Pyrenees mix.