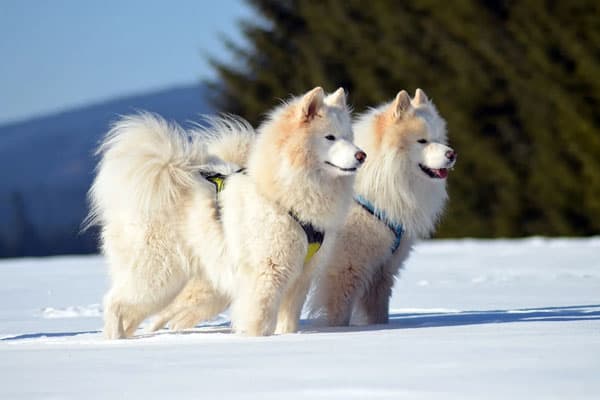 Samoyed dogs excel at agility and other canine athletics events. They make great hunting partners and are a fabulous choice for a working canine sidekick.

By taking the time to really understand the unique smarts of the ancient and noble Samoyed dog breed, you will be able to provide the right type of training to encourage your dog to learn and obey.

Samoyed dogs are smart, but they are not smart in the way most people traditionally view canine intelligence.

There are several types of canine intelligence, and the type the Samoyed has featured the ability to think independently of people and come up with quick solutions to difficult problems, like which way to turn the sled to avoid dangerous ice patches.

When you learn more about the Samoyed breed history, you will better understand how to harness and direct your Samoyed’s type of canine intelligence.

This popular YouTube video features a Samoyed named Hatchi learning lots of new tricks. At one point Hatchi even walks another dog on a leash!

This is proof that Samoyed dogs have a very high IQ, even if they sometimes decide on their own not to use it in ways their people prefer.

What Type of Intelligence Does the Samoyed Dog Have?

According to Science Alert, the Samoyed dog breed ranks number 33 out of a list of 79 purebred dog breeds.

Does this mean the Samoyed dog breed has just average intelligence? Not a bit!

Rather, it means that the type of canine intelligence that a particular survey measured is not the kind of intelligence the Samoyed dog scores highest in.

The type of intelligence that survey measured is the type that focuses on how quickly a dog can learn new commands and obey them.

To understand the Samoyed dog’s specific type of canine smarts, you need to first understand this dog breed’s history.

A Fascinating Glimpse Into the Samoyed Dog Breed History

As the American Kennel Club (AKC) explains, the Samoyed is only a medium-sized dog breed – and a very fluffy one at that.

These dogs don’t necessarily look like the powerhouse canine athletes that they are, pulling heavy sleds full of people and cargo across vast expanses of ice and snow in what is today called Siberia.

Working in sled dog teams has created a unique type of intelligence in the Samoyed dog breed. These dogs were also prized by their human carers for hunting in packs to bring down enormous prey like the Siberian reindeer.

Later, Samoyed dogs and dog teams were repurposed yet again to help herd reindeer and protect them from ferocious wild predators that were often twice their size.

Samoyed dogs have developed an independent spirit for this very reason. Their work over the centuries has often involved having to make split-second decisions, whether about avoiding unstable icy ground or how best to defend a herd against wild wolves.

But each night, with another long and grueling workday behind them, these dogs were then sheltered inside the tents with their people, huddling together for warmth as well as companionship.

This speaks to the essentially loving and people-focused nature of the Samoyed dog breed. Samoyed dogs love people, but they do not always readily understand the point of learning certain common canine commands and tricks.

This YouTube video made by a Samoyed owner clearly illustrates this fact. The owner decided to administer a traditional “canine intelligence test” to his Samoyed, Samson.

Not surprisingly, Samson seemed to fail to grasp the point of certain commands. This is very common for herding dogs, sled dogs, and certain other working dog breeds whose jobs require working at a distance without direct access to human support and assistance.

This doesn’t mean the Samoyed dog is not smart. In some ways, it means the Samoyed is smarter than many other dog breeds today!

How to Train a Samoyed Dog

As the owner of Middle the Samoyed explains on the dog’s blog, Samoyeds are well-known for being a touch stubborn and rather too keen to rely on their own ideas of what seems best in a given situation.

But this does not mean that a Samoyed dog is not trainable or will not make a great family pet.

What it does mean is that you may have a long road ahead of you to teach your Samoyed dog the commands a companion canine needs to know to stay safe and healthy in a pet sitting.

It may also mean you may choose to hire a pet dog trainer to help you, especially if you are a first-time dog owner or a first-time Samoyed owner.

And you will need to adjust your expectations to factor in the differences you just learned about how the Samoyed dog’s brain works.

In other words, there may be some training commands your dog never fully masters, especially if there is any type of intense provocation to do just the opposite.

For example, Samoyeds, like all sled dog breeds, have an innate genetic impulse to run.

So while there are rare instances of Samoyeds being successfully trained to the point where they can be let off-leash in open areas, it is usually not advisable or safe.

Why Your Samoyed Dog May Struggle to Learn Some Training Commands

Samoyed dogs have such a long breed history of working as sled dogs, hunting dogs, and herding dogs that their brains have literally adapted to make them excel at these types of independent jobs.

This is a strength if you need your Samoyed to pull a sleigh for you, herd a reindeer or help you hunt.

It is not necessarily a strength if you want your Samoyed to be a perfectly obedient family pet.

The types of commands your Samoyed is likely to struggle the most with will always be the commands that seem to be at war with your dog’s native instincts.

For instance, the common command “Stay” is a tough one for many Samoyed owners to train. Why?

Because Samoyeds as a breed are on the move for hours upon hours per day. If they ever heard the command “stay” it would be once at the end of a long day of work.

Samoyeds just don’t get why they need to “stay” when they are bred to run and chase and haul and hunt and herd.

Samoyed dogs are working dogs for whom no two days are ever exactly alike. In their native working dog roles, danger or opportunity could lurk around every bend. Closing their eyes for a second could get them or their mushers (sled dog humans) killed.

When seen through your dog’s eyes, it makes more sense why long, repetitive training sessions might be perceived as incredibly boring and dull – well worth ignoring.

In fact, as the Samoyed Club of America points out, a bored Samoyed has a well-documented habit of literally chewing the hair off their limbs and tail just to have something to do!

This also means that over-feeding a Samoyed during training sessions as a way to motivate continued learning is a very real danger. The last thing you need is a bored, stubborn Samoyed who is also now fat!

This is why expert dog trainers like Ty the Dog Guy recommend that you enroll your dog in training in puppyhood and preferably the day you bring your puppy home.

This is the best way to avoid having your puppy develop unwelcome habits that become much harder to get rid of when your Samoyed becomes an adult.

Keep training sessions short and focused. Set out your training treats for the day and don’t exceed that amount. Make sure you find creative ways to present the same information so you keep your dog guessing and engaged.

Be firm and consistent in terms of your own behavior and role as the trainer. It can also help to have everyone in the family participate in training, as the Samoyed is a breed that can have a tendency to bond more closely with one person only.

A Busy Samoyed Is a Happy Samoyed

Finally, the more activity and enrichment you can provide for your Samoyed, the greater the chance that training sessions will go well.

The reason being, your dog will be too exhausted to even consider not obeying you! Are Samoyeds Good for First Time Owners: What to Know Before Choosing a Samoyed Dog When Do Samoyeds Calm Down: The Truth About This Active Working Dog Breed Are Samoyed Good Apartment Dogs: Find Out If Your Home Is Big Enough for Samoyed Dogs Are Samoyeds Good With Other Dogs: Why These Dogs Enjoy Canine Company