The Chow Chow and Pomeranian seem worlds apart. Initially, you may not think a Pom Chow mix even warrants your consideration as a pet.

Eventually, it might occur to you that maybe these dogs are not so different after all. And possibly, the cross shows a few fascinating improvements over the parent breeds.

The Chow Chow Pomeranian mix is a small dog that looks like a stuffed toy bear. It is most commonly red, cream, or sable.

Chow Pom mixes are unusual companion dogs in that they are more independent and dominant than you expect based on their size. Most people consider them adorable yet practical watchdogs.

The history of the Chow Pomeranian mix as a regular cross is as murky as many other designer dogs. Probably formally arising in the 2000s, the hybrid goes by a few different names:

The Chowanian’s original purpose is also unclear, but the main goal was probably companionship. Breeders may have also wanted to create a miniature Chow.

The cross involves a medium primitive Spitz developed in China over 2,000 years ago, and a Toy breed downsized from 40-pound sled dogs from the northern German and Polish areas.

After becoming established, Pomeranians have been a frequent choice to miniaturize certain breeds.

The Pomchow is not recognized outside of hybrid registries, but the Chow Chow joined the non-sporting group of the AKC in 1903. The AKC recognized the Pomeranian as a Toy breed in 1888.

Pros and Cons of a Chow Chow Pomeranian Mix

As with any mixed or purebred dog, Chow Chow Pom mixes are must-haves for some owners and not quite a fit for others.

Reasons Why You Shouldn’t Get a Chow Chow Pomeranian Mix

A Chow Chow Pom mix is cute enough, but it is not a breed for every family.

Reasons Why You Should Get a Chow Chow Pomeranian Mix

A Chow Chow Pomeranian mix is a cross between a medium and a small-sized Spitz. Its appearance and personality are more predictable than some other mixes you might observe.

A Pomchow has a wedge-shaped face much less massive than a Chow. The lips typically curve slightly upwards. These dogs can have a foxlike muzzle, or you can see moderate broadness reminiscent of the Chow Chow.

Chowpoms have small triangular ears that are pointed or slightly rounded at the tips. The eyes are round, medium-sized, wide-spaced, and dark.

Chow Chow Pomeranian mixes will have an entirely or partially blue-black tongue.

Chow Pom usually mixes only hint at the scowl characteristic of the Chow breed. Your dog will be compact, appearing to be the same height and length.

The back is level and strong, and the hocks are straight. The neck is medium in length and muscular, while the shoulders are perpendicular to the ground and well-built.

Chow Pom hybrids have wide and powerful hindquarters. The tail is low-set onto the croup. It barely hangs to the level of the hocks, and the Pomchow generally carries it over its back.

Pomchows often show improved health and vigor over their Chow parents because of a longer snout.

A Chowanian will have a dense medium-long dual coat. The outer guard hairs are straight and soft. They are off-standing, giving the Pomchow a fluffy appearance. The undercoat is plush.

A Chow Chow Pomeranian mix’s fur is designed to insulate the dog against cold and warm weather, although it is much more effective against frigid conditions.

If a short-haired Chow is used in the cross, your pup can have a shorter coat.

However, a short coat is more likely with a second backcross to a short-haired Chow. This is not frequently practiced.

Pomchows can come in a multitude of colors.

A Chowpom is loyal and loving, often choosing one or two people upon whom to shower all its affection. Some dogs of the breed are cuddly, while others are more comfortable simply being near you.

A Pomchow tends to be initially wary of unfamiliar visitors. Individual differences show a wide range, with some dogs friendlier than others. Most will be polite with guests if your body language says they are no threat.

Some Pomchows are friendly once they get past the initial introductions—many warm up to strangers over time and repeated visits.

Some Pomchows can tolerate extended periods of alone time during the day. Others are “Velcro” dogs and exhibit separation anxiety if their owner disappears, even for a moment.

Bored dogs may chew fixtures in the house or try to escape. Chowanians are intelligent, independent, dominant, and alert. Those who take more after the Pomeranian parent are playful, while those like Chows have a no-nonsense approach to life.

Chows have an average life expectancy of 10 to 13 years, while Pomeranians live 12 to 16 years. Your Chowpom has a lifespan of about 11 to 15 years.

Probably because they resemble overgrown Teddy bears, Pomchows command higher prices than many other designer-type dogs, a puppy might sell for $2,000 to $4,000 or more.

You can find cheaper Pomchows at shelters or humane societies, although looking at a dog is highly inaccurate in determining its possible breeds.

You might run across backyard breeders willing to give away puppies from accidental litters. Always choose pups with no evidence of disease.

You cannot always rely on the records of hybrid breeders, but some put their dogs through genetic testing. Evaluations appropriate for Pomchows involve the eyes, knees, and hips.

The basics of grooming a Pomchow, much like any dog, include the following:

With the Chowanian’s long double coat that has the potential to develop mats, you must brush it at least every other day. A pin brush is not long enough to get through all layers, so add a wire brush and a rake. A rake is ideal for the undercoat.

You will probably have to brush your dog daily during heavy shedding in the fall and spring. At such times, the undercoat clumps and falls out in many tufts.

Despite the damage it can cause to the coat; many owners shave their Pomchows. A typical style is to leave a length of fur on the head, legs, and tail.

Problems arise because clipping removes the fur’s insulating properties, and sometimes the hair never grows back the same.

You can expect a few health problems with your Chow Pomeranian mix despite claims that hybrids are healthier than purebreds. Some of the likeliest issues are:

Many Spitz breeds were selected to thrive on less food than typical dogs.

A Chowanian needs from 25 to 30 calories per pound each day. This works out to about 2.25 to 2.75 cups of kibble. Since raw and canned food has more moisture, the volume you need to feed is greater. Puppies require 50 to 90 calories for every pound that they weigh.

High-quality food for dogs comprises meat and lesser quantities of fats. Companies can add vitamins and minerals from as many whole food ingredients as possible or utilize synthetics.

You must learn how to read food labels to determine what you are giving your dog. Sometimes, you may even have to contact the dog food company directly. You can also consult with a canine nutritionist.

Although carbs are controversial among dog lovers, dogs likely benefit from a balanced diet that includes greens, certain types of squash, and low-sugar fruits like berries.

It would help if you periodically felt your dog’s frame under her thick coat to detect excessive weight gain. You should be able to discern her ribs under a thin layer of fat.

It will probably be difficult, but try to detect a waist as you look down on your pet and at least a slight abdominal uptuck as you look at her from the side.

Pomchows are energetic and need more exercise than either of their parent breeds separately. Plan on providing 60 to 90 minutes of daily exercise for your pet.

Twenty minutes should involve high-intensity running or playing for adults. You can spend twenty to thirty minutes on training.

Your dog will do better with his exercise split into two or more sessions at least a few hours apart.

Puppies that are growing do not require organized exercise sessions. Please make sure they get plenty of playtime and training. Formal walks should not be more than five minutes per month and should not exceed 30 minutes between six and ten months old.

Despite its reputation as a lapdog, the Pomeranian ranks 23rd of 79 breeds in working intelligence according to renowned animal psychologist Stanley Coren’s list. Chows, on the other hand, rank near the bottom in obedience and trainability.

Your mix is likely to have average trainability, with most difficulties stemming from a pushy and obstinate personality. You must, in turn, be self-assured and firm without resorting to force. Chowpoms can be especially challenging for novice owners as they will take advantage of any hesitancy.

Chowpoms can be excellent family companions for a couple, a single person, or a unit with older children. They do best with no other household pets or perhaps one dog of equal size.

They are affectionate but may need to be trained to spread their affection among multiple family members.

Chow Chow Pomeranian mixes are excellent watchdogs with some guarding instincts. Socialization is critical, or your dog may become aggressive. Even when fearful and unsocialized, Pomchows tend to be snappy.

Neither Chows nor Pomeranians are particularly good with other dogs.

Chows do not always respond positively to attempts at socialization with other animals, but Poms will learn proper canine etiquette with frequent and early exposure.

Chows have a history of guarding livestock, so Chow Pom mixes can behave amiably around farm animals if socialized. Pomchows should not be trusted with small pets, including cats, because of a high prey drive. Occasionally, the mix can get along with cats if they grow up together. Finnish Spitz Pomeranian Mix: What Can You Expect? 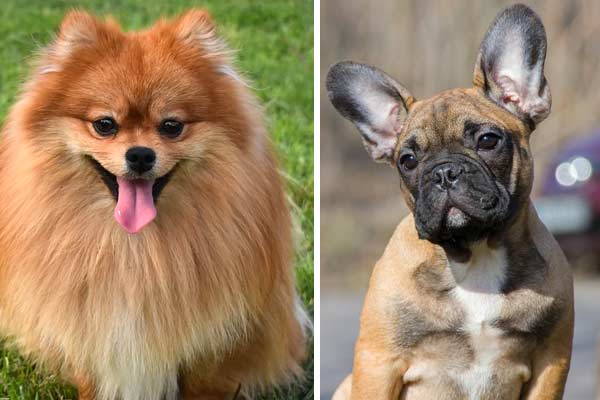 French Bulldog Pomeranian Mix: What Makes it So Popular? Pomeranian Labrador Mix: What Traits Does this Mix Have